If you’re a California Injured Worker you may be receiving a letter similar. Previously, I declined this mail-order pharmacy which was solicited over the phone as an option. On July 18, 2015, the letter I received states that as of August 1, 2015, all Workers Compensation prescriptions will be filled through a remote mail-order pharmacy only. As I researched, I learned that two of the main reasons is for cost reduction and because injured workers supposedly demanded their prescriptions to be filled at certain pharmacies. Really? You mean you couldn’t contract with legitimate pharmacies that are in good standing? You think injured workers are trying to rip you off? We don’t have anything to do with the cost of pharmaceuticals or medical supplies. I think you’re trying to put me in a compromising position by forcing me to have medication delivered where I can’t be absolutely responsible for its delivery. I tried this once because you tried to sell me the plus side before I opted out and continued to decline again. What happened? The box was left out front for anyone to take. I never knew when it would be here. You know darned good and well if a patient calls to say their medications haven’t been received they are not going to get them again. There are laws in place for this. That is why when at my current pharmacy they know when the medication is ordered, filled, when it is picked up and by who. There is no discrepancy. You can’t control the mail service, the delivery person, the time of day delivered, or any potential consequences and neither can I.

“In the event a medical emergency arises and it is not reasonably and immediately possible for you to obtain the required prescribed medication through our selected pharmacy Benefits Manager, Helios, please visit a local network pharmacy in your area.” Again really? Who’s going to note in the permanent record it was an emergency and the reason for an alternate and local location? I don’t want my PDMP (CURES) showing different pharmacies. You know, pharmacy hopping and all. 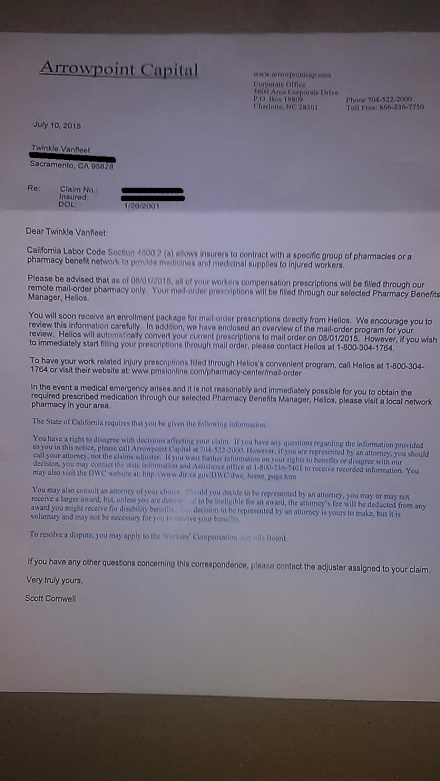 Additionally, I was given less than 2 weeks notice of this sudden change. I haven’t received the “enrollment package” and it’s the 24th. So I suppose I should be the one to run this Helios down?

Yes, you have been able to reach me by the phone several times. I said no thank you, told you why, and I wasn’t told I couldn’t choose to decline. Please refer to your recorded calls for quality assurance.

At least have the decency to be truthful and the common courtesy to be on time. Wait! The last 14 years have been full of denials and delays. Yes, of course, this would be last-minute, too.