Prescription drug abuse versus chronic pain care continues to be a hot topic.  In a previous post How should U.S. regulate powerful pain killers? American Academy of Pain Management’s Executive Director, Bob Twillman, PhD discusses opioid prescribing and regulations with Dr. Andrew Kolodny, Director of Physicians for Responsible Opioid Prescribing on PBS’s Newshour.  Dr. Kolodny acknowledges Chronic Pain is a serious problem. He adds “But, unfortunately, we are harming far more people with chronic pain than we’re helping when we treat them with long-term opioid medications”.

He doesn’t believe long term use of opioids should be prescribed to those with low back pain, Fibromyalgia and chronic headaches.  He goes on to discuss what many of us believe in that there is a separate population in the drug abuse epidemic and chronic pain person.

I do believe there is an overlap in some patients. I do not believe all patients should be classified in the overlap scenario. I do know that opioid induced hyperalgesia can occur from long term use, but usually when the medication is increased for not controlling pain. I also know people who have experienced it who have taken it as prescribed long term.

Harming which ones? All of them? Some of us? One or two? Consider another possible epidemic by the refusal, discontinuation, denials, and/or delays of needed medication, suicide. Patients are becoming pre disposed to emotions and actions they would have never felt or done otherwise.

Sadly, many overdoses are from abusing, mixing with alcohol, illicit street drugs, changing the Rx and simply not thinking. No one wants to be accountable instead just bounce the blame.

In a recent publication, The Unintended Side Effects of Fighting Prescription Drug Abuse, an op-ed piece published January 8th, 2015 on the California Progress Report, I shared a bit of me and spoke on the importance and options of Abuse Deterrent Formulations (ADF) while also showing that there are some people whose quality of life depends on an opioid medication.

It seems my article has come under some scrutiny by opposer’s of opioid prescribing.  I am heading into my 15 year with the diagnosis of CRPS /Causalgia type 2 with confirmed nerve damage. Complex Regional Pain Syndrome/Reflex Sympathetic Dystrophy are other names. A neurological, neuropathic autoimmune disease which causes a malfunction in the Sympathetic Nervous System commonly known as Fight or Flight. Now referred to as Fight, Flight,or Freeze)  (1 of 2 parts of the Autonomic Nervous System), Autonomic Nervous System ANS (Sympathetic SNS and Para-Sympathetic PNS). All of which reside within the Central Nervous System CNS. RSD/CRPS described by the National Institute of Neurological Disorders and Stroke in 2001 and also at the National Institute of Neurological Disorders and Stroke we know more. While it’s rated 42/50 on the McGill pain index, I use all the additional tools I’ve learned over the years. Meditation, bio feedback, deep breathing, imagery, guided imagery, distraction, pacing activities, relaxation techniques, progressive muscle relaxation audios, hearts house and various other modalities to help ease my own pain.

I’ve had a Permanent Spinal Cord Stimulator implant since 2006.  I am on one low dose narcotic.  The lowest dose for it’s type.  My other medications do not apply.

I’ve been a part of the California Medical Board’s Prescribing Task Force in Sacramento California since it was formed.  I do not advocate for or endorse any opioid analgesic.  I gave testimony for Senate Public Safety on SB 1258 (DeSaulnier) April 29, 2014.

I agree there is a problem.  I appreciate the passion in those who are advocating for change in over prescribing, abuse, misuse and diversion. I too have the same goal, but not an agenda at the risk of cutting patients off medication. Try to appreciate my passion in the fact that many chronic pain patients are being depraved proper pain care due to the “epidemic”.  One second I hear certain Workers Compensation posters complain about Lidoderm being prescribed to pain patients stating that it’s intent is for Shingles. True, but let me clear something up for that poster, “Post Shingle Pain”. One cannot use it during and until any open wounds or blistering heals. LIDODERM® (lidocaine patch 5%) is used to relieve the pain of post-herpetic neuralgia, also referred to as after-shingles pain. Apply only to intact skin with no blisters.

Lidoderm, seriously? Weren’t we just talking about opioids? The reason I mentioned this is because the same page that complained.. also complained about opiods with the WC treated patient.

Tell me what you want, what you really really want! In other words, a narcotic or a lidoderm patch. Hm…    sheesh.

I agree that patients should be assessed accordingly. Patient Evaluation and Risk Stratification should be utilized to mitigate potential risks. I’ve been with the same doctor since 2004, I use the same pharmacy.  I’m randomly drug tested for my prescription medications and for those not prescribed, illegal ones.

The overlap is partial.  Drug abuse and pain care do not overlap entirely. There is a difference between dependency and addiction.

Dependency, (Psychol) over reliance by a person on another person or on a drug,

Addiction, the state of being enslaved to a habit or practice or to something that is psychologically or physically habit-forming, as narcotics, to such an extent that its cessation causes severe trauma. The condition of being abnormally dependent on some habit, esp compulsive dependency on narcotic drugs. Habitual psychological and physiological dependence on a substance or practice beyond one’s voluntary control. A physical or psychological need for a habit-forming substance, such as a drug or alcohol. In physical addiction, the body adapts to the substance being used and gradually requires increased amounts to reproduce the effects originally produced by smaller doses.

Addiction is when you want and crave the drug so bad your body has to have it, some will lie, steal and search until they get their fix.

I’ll use myself as an example, dependent, yes. I rely on it to ease pain that is often so unbearable most of you would have no idea.  Unrelenting, constant… all day, all night.

So lets take a look

The above photo is 6 years after the injury that led to my diagnosis.  Can you possibly imagine walking on that? This photo includes swelling, blood vessel constriction, discoloration and the burning pain while internal became exterior to the point of simulating actual burns. I cycle through my symptoms which include burning, ice fire, discoloration, temperature changes to the extremity, hair and nail changes, sensory and motor difficulties, atrophy is apparent when swelling has eased.  These cycles occur daily. I’m sensitive to loud sounds, my skin is hyper sensitive. Clothing hurts. I’m unable to drive and have to rely on 3 people to get me anywhere. Allodynia and hyperalgesia are present. Bones have wasted away in addition to muscle. You can feel it. Increases in barometric pressure causes flare-ups. Now imagine that throughout your body.  Several secondary diagnosis’ that I will not discuss at this time.

These photos include atrophy when swelling reduces to bone. Try putting a shoe on that or trying to be a productive member of society. Chronic pain patients already have a negative stigma of being whiners, complainer’s and drug seekers.  None of what I’ve written includes the back pain caused by the same injury, or the hard landing of my head on concrete flooring. I won’t even go into secondary depression due to the loss.  Lose what you wonder? All that you might have been! I volunteer 1-4 hours a week. That’s what my life is. We are all different.

Taking medication as prescribed, not sooner, not later, not double dipping makes up half the difference here. 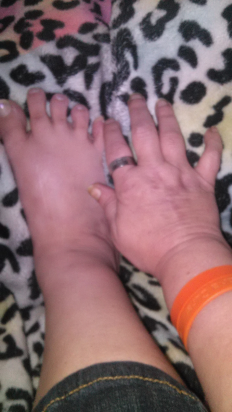 We should be working together to bring a sound solution to this ongoing topic while keeping in mind,.. It really hurts to hurt!  Ask yourselves this, what if we were you. What if you were one of us?!

First it was the patients abusing the drugs, now it’s the physician’s fault for prescribing them. I can’t wait to find out whose fault it is next.

Would you trade places with me?

Nope, you’d most likely beg for pain relief in the form of an opioid.

So let’s be easy on each other.

I wish you pain eased days and nights,