I spent the morning with my family before check out. Last night was suppose to be G’bye for now, but my husband took me back over this morning so that I could braid my moms hair and see her one more time. They should arrive back home in Georgia in about 10 days.

I was spoiled with other life stories I had never heard, a new bathing suit (Okay not really new but brand new to me. It was my little sisters new one :)). I was spoiled with precious time, love, and new memories with them. They gifted me with a new hip/shoulder bag from Disneyland. I felt like a little kid again. My littlest sister asked me again to move to Georgia, my mom wishes I could. I had made plans to go last year yet there would be so much to do in order to. I’d either have to sell my home or rent it out, repair it before any of that and just toss most of it away. While I want to my biggest concern or worry if you will is letting it all go to start over and then if I lost them I’d be left in a place that’s not my home. It’s only my home because it’s theirs and I’ve never lived there. Home is where the heart is until the heart no longer exists.

I can adapt to change because I have to. I don’t favor it otherwise and I rather not seek it to find it. Ha! Change is really the only thing that’s constant.

“The way up and the way down are one and the same”. ~Heraclitus

This year has truly been a blessing on so many levels. I’ve come so far in such little time. Enlightened at a much higher level. As an empath/sensitive I always carried my pain and yours. And while I may not ever be able to set that aside, I know better to remove myself from such pains that instigate my own.

My physical pain is manageable without any medications. My emotional stability is stable. Neither of these are to insinuate they no longer exist but instead show that even in trauma regardless of the type or anything overlapping that our animal instinct as humans can guide our survival.

What a ride it’s been!

RSD/CRPS and other conditions as well stimulate the stress response. Fight or Flight. Fight or run away. Fight, flight or freeze as it’s also come to be known. If your hungry you’re going to find your food. If you’re threatened your survival instinct is to survive. If you’re in pain your instinct would be to relieve it. Pain of any kind effects our minds. Some people are enraged to hear such things because they have to defend their pain as not being mental. It’s all mental. Without your brain, you’re mind, we couldn’t feel pain therefore mental health is always a coexisting factor.

Aside from having not driven but a handful of times in 17 years due to the CRPS injury and having to rely on my husband and then my children to go anywhere at all and the fact that my drivers license continues to dangle on the edge of suspension due to Narcolepsy, I’m more interested in being able to again than saying I never will.

I’m more interested in recognizing other peoples pain than I am in awareness right now. I love listening to other people’s stories because lets face it everyone is unique in what they endure. Without those people there isn’t anything to raise awareness for.

I didn’t want to see my mom go but I have to adapt again to not having her. I will.

June 30th, 2017. Saying G’bye before they drove to Disneyland and the last time my son would be with his grandparents on this trip.

My son has only met his grandparents a few times in his life. My mom and my step father. He’s never met my dad as he was already deceased 6 years before Ozra was born. Ozra has never met his paternal grandparents because they both died years before his birth. I can still remember his little voice asking me “Why didn’t they stay to meet me”?Heartbreaking. Our daughters being much older than him had the privilege of meeting all of them and they do retain vague memories. Happy ones. 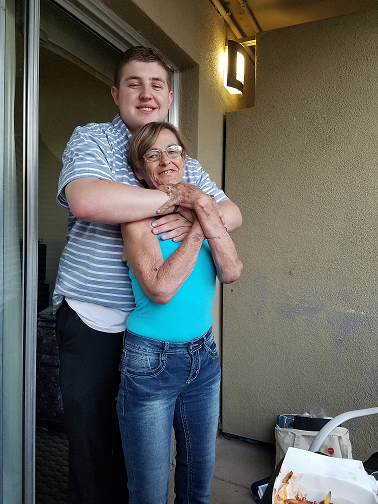 I have a really tall son! Us girls are all shorties. I’m actually the tallest of my mom and my sister (the one she gave birth to, not my adopted sister. Wait! I’m taller than Rosie, too! :)). My sons dad, my husband of 30+ years is inches shorter. His sisters (Same father of course) have no height either. Our second daughter Rikki is an inch taller than I. Kharisma didn’t get an extra inch. ~laughs. Our grandson is already taller than me and he’s 11.

If I don’t get outside to my little pool and do my routines, I’ll dwell on not having done it. 😛

I love you mom!