Health, healthcare, and the family unit has remained my focus. Change is constant and adapting is necessary. I’ve made some changes to a few of my accounts as my group is getting out of hand with requests, my inbox is out of control, and I can’t keep up with the repairs. I’ve left several groups and will be leaving others. I’m trying to figure out how to do this without offending anyone. I didn’t join these groups. I belonged to over 40 on Facebook. I’ve only joined 4 or 5 since joining in 2009. 20 of the groups, I’ve never even been in. I just learned how to figure that out, who added me, and when. I had no idea. Shows how little I actually know about navigating the Facebook. What brought this all to my attention was being notified asking how I could be in so many and why I haven’t been blocked from Facebook for joining all of them. Um, huh? Most likely because I didn’t join them. This wasn’t the first time I received a message of this sort, the first time was last year. I removed myself from several groups then. Since then, I’ve been re added, and made apart of even more. It is not that I don’t want to be in these groups or support the people who created them. I don’t have time to offer support, participate. It makes it look to some like I’m just there to, I don’t know, be nosy? I don’t like these assumptions especially when I didn’t join and I’m not able to make it into most of them in the first place. I know not everyone thinks this and some have just been friendly invites of mutual interest. I rarely send out friend requests, and will accept a few. The groups I have joined are unrelated to CRPS.

I’m exhausted by people insinuating that if someone isn’t with them then the other person is against them. People don’t have to like what you like, support it, participate or advocate to remain mutual with you. Sometimes it has nothing to do with not supporting something, sometimes it’s simply because people lack ability to take part. You don’t have to prefer what I favor, but I can respect you for thinking differently or believing in something else. I can respect you for not jumping on my advocacy efforts because you have no interest in it, or are without time or energy to take part.

It changes when there is no mutual regard.

Most people feel that respect is earned. I don’t ascribe to that idea. I respect right away. When I meet you, I respect you. From there it can only be lost.

As I write this, I’m slowly moving back into my bedroom. Just came back last night. I’ve been staying elsewhere in the home for quite some time. I imagine it will take me months. The other area has to be cleared away as well. Some items moved to the bedroom and others to different areas.

My mom, dad and sister niece will be here in 3 weeks. Can’t wait to see them. Haven’t seen mom in years. She just had a pacemaker implanted last month. She’s doing well considering the emergency placement from doctor appointment directly to the hospital for surgery. They are driving from Georgia and taking is slow. It’s important for her to see her granddaughter Kharisma since we don’t know the future of our daughter’s hepatic epithelioid hemangioendothelioma diagnosis. Excited for the time we will have together.

My husband was supposed to have surgery yesterday, yet was postponed. We were told it would be this upcoming week, but no word yet on rescheduling.

I have an ultrasound scheduled for the 29th. That appointment was scheduled 10 days after the surgery my man would have had on the 19th. The ultrasound is for a possible procedure pending results. Not sure as of yet if I will be able to keep that appointment. Doing what I can to get these symptoms.

Our grandson was promoted to the 4th grade. He’s growing up too fast. Our daughter Rikki is doing well.

And finally, our son left home about 2 weeks ago. Exploring life and working on his goals for the future. I know he can be whatever he sets his mind to. He already is! 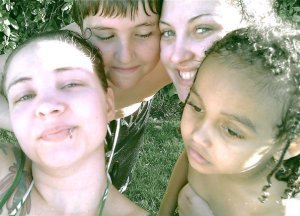 My Tweets
Join 2,500 other subscribers